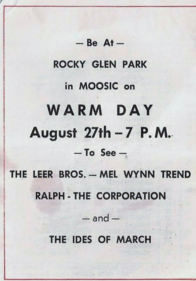 The Leer Brothers Band incorporated former members of Mel Wynn & The Rhythm Aces, The Rhythm Blues, North American Bear, and others.  The Wilkes Barre-Scranton-Hazleton area had as much talent as it had anthracite.
The Leer Brothers Band played all over PA, NY, and NJ with occasional forays into OH, VA and WV. They played clubs, colleges, high schools, concerts, proms, dances, frat /sorority parties and formals from 1969 to 1983.  They also made records for Intrepid, Mercury and Buddah.
It seemed that The Leer Brothers Band was always too involved in the music part of the band -  neglecting the care and feeding of the "promotional" aspects of the business. It has taken some effort to convince "the brothers" that maybe, just maybe, they should grab a domain, blog, whatever and give this thing a shot.

At least they may be able to reconnect with those fans that came to dance and support and have fun with the band.

At least they can have a place for everyone to share what memories remain.